The Beginning of a New Santa Anita Meet 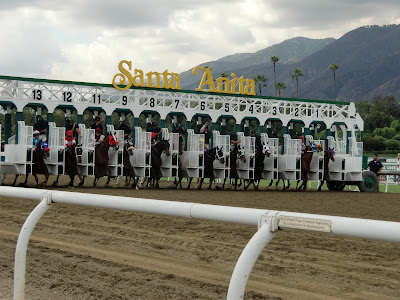 The day after Christmas will once again bring with the beginning of a new Santa Anita meet. With the passage of time since the autumn meet ended, changes have occurred. Some are good, some are interesting and some have major repercussions.

The first big change is the actual landscape of the track grounds itself. Due to the hurricane-force winds that hit the track at the beginning of the month, several dozen trees suffered damage all over the track grounds. Along the streets that surround the track, several trees were blown clear out of the ground and uprooted. On the west side of the grandstand, three trees fell in the grassy area west of the fountain. Speaking of the grandstand, the roof was resurfaced during the off-season. The giant video board in the infield has been upgraded as well, with the new iteration several feet shorter, allowing for an unobstructed view of the backstretch for the camera.

The stakes schedule has gone some tweaks as well from previous years. The biggest change is the Grade 1 Santa Anita Oaks is now being run a week before the Santa Anita Derby this year. In recent times it has been run a month before the SA Derby, (on or around Big 'Cap day). The prep for the Oaks, the Las Virgenes, will slide into the Oaks spot on the calendar. The 3yo colts schedule has also been altered, with the Sham being shortened to the old San Rafael Stakes (which is now completely gone from the calendar) distance of a mile. The R.B Lewis is shortened back to 8.5 furlongs as well. Another change is that the Grade 2 Arcadia Handicap will now serve as the prep for the Grade 1 Kilroe Mile (which is run on the Big 'Cap day undercard) by being run on the Strub Stakes undercard. Other changes include the suspension of the Grade 2 San Luis Obispo (12f on the grass) and the Grade 3 Thunder Road (1 mile on turf) for this year from the stakes schedule.

One change that carries over from last year is the addition of Steve Asmussen's charges to the backside. He brings many of his big buzz horses out with him out west. The biggest name is Breeders' Cup Juvenile Fillies winner My Miss Aurelia. The division leader will look to add another Grade 1 or two this winter to her already strong resume. Others in his barn include last year's Sham winner Tapizar, up and coming 3yo colt Rothko (who runs in the Malibu) and a ton of soon-to-be-3yo talent with Kentucky Derby aspirations such as Sabercat, Hierro and Wharton.

Opening day figures to be sunny, warm, fast and firm, and filled with good racing. Which soon-to-be 3yo will step up and take control of the division, the SA Derby and head to Kentucky to break the drought? Can a horse use the Strub or La Canada series to launch themselves to older division glory? We shall see if any horse can deliver on these thoughts. Good luck everybody!
Posted by tencentcielo at 11:59 AM