A Four Pack of Stakes to Open the Santa Anita Meet

Opening day at The Great Race Place brings along 4 stakes as a present to the patrons. The action will start with the first race on the card, with the filly division of the Cal Breeders' Champion Stakes. A few races later, the rest of the stakes actions starts with male division of the Cal Breeders' Champion Stakes. Then the graded action starts up with the Grade 3 Sir Beaufort. Then the Grade 1 Malibu wraps up the card and the natural stakes pick 3. Let's get to the action. 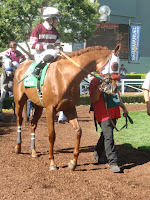 The opener on the card is the filly division of the California Breeders Champion Stakes. Six entrants make up the field going seven furlongs, with a mix of some stakes tested horses and some up and comers. The favorite figures to be Ismene. She won the Anokia Stakes last time she ran in October, defeating highly regarded Sister Moon. She has solid speed, but 7 furlongs off two months layoff is not ideal. Willa B Awesome (right) has "danced every dance" in stakes competition this year, and looks to improve on the cutback. The pick is Tangerine Tickle. This daughter of Tribal Rule (as is Ismene) won her debut on turf across-town after a slow start. She appears that she may have some tracking speed to lay closer to the pace, and should come with a good rush at the end. 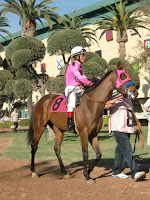 The open division of the Cal Breeders Champion Stakes brings together a group of 9. The favorite figures to be Stoney Fleece (right). This son of Decarchy captured the Grade 3 Generous (over turf) last time out. He benefited from a fast pace last time out, and the cutback in distance does not figure to hurt him, as he broke his maiden going a shorter distance. The only negative might be the return to dirt, where he ran a so-so 3rd. Passing Game comes off a stakes win up north at Golden Gate. This son of Game Plan will be making his debut over dirt today, but with the expected large amount of speed to be shown, he should get a good race set-up. Motown Men (also by Decarchy) is a need-the-lead type who should appreciate the cutback to one turn. While there is other speed, he has been already battle tested in stakes company. 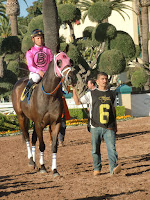 The graded stakes action begins with the Grade 3 Sir Beaufort going one mile on the grass. The favorite figures to be Mr. Commons. While this son of Artie Schiller has never won a graded stakes, he has run second in several stakes against older, and ran a competitive fifth in the BC Mile. The streaking Ultimate Eagle comes off his Grade 1 win in the Hollywood Derby going 10 furlongs. Cutting back two furlongs does pose a bit of difficulty, especially since he appears to be a need-the-lead type and there appears to be other speed. Venomous and Cozy Kitten also come out of that race, and they would seem to appreciate the cutback to a shorter distance. But the pick is Comma To The Top (right). This former Grade 1 winner returned to the winner's circle in an allowance race last time out, has the speed to clear Ultimate Eagle early, make a move turning for home and just hold off the closers. 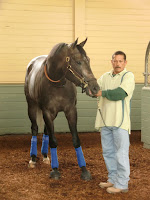 The final stake on the card is the Grade 1 Malibu. This long-standing race has a rich tradition of winners, including the great Spectacular Bid. This group does not have a clear standout this year, as the morning line favorite comes off some tough losses. The Factor (right) looked to be a force in the Sprint division this year until he ran two back-to-back sub-par races this fall. He gets off the rail after being stuck down there in his last two starts, and he is working rather stoutly for this race. There also appears not to be a copious amount of raw speed either, so it is possible that, if he is right, The Factor can cross-and-clear to the front and just keep going. But he is one of four for Baffert, with each of them having a shot. Hoorayforhollywood (the pick) comes off a close second in a stakes race at Delta, Smash has always been highly regarded of in the barn, and Racing Aptitude held off his older stablemate in a fast win. Trainer Steve Asmussen sends out three entrants to counter, including the very fast Rothko and the multiple graded stakes placed Wine Police. Throw in the shipper Associate from the Dick Dutrow barn (who brings Ramon Dominguez in tow) and it is a stout betting affair.

So there is a quick look at the stakes action on opening day at the Great Race Place. The action figures to be fast and furious, with plenty of high quality racing. Good luck everybody!
Posted by tencentcielo at 9:51 AM