With the change in the season to fall, the Southern California circuit returns to the Great Race Place at the foot of the San Gabriel Mountains. This year marks the first time in 43 years that the fall racing is not run by the Oak Tree Racing Association. Santa Anita has taken the dates from them after evicting them two years ago. Opening weekend will offer seven graded stakes spread over the three days, including five grade ones. The traditional commemorative stein given away has been replaced on the calendar by an ever popular food truck festival in the infield. With all of the changes about, the stakes schedule starts off in the same way it had in recent years, with a turf sprint. The Grade 3 race figures to produce multiple starters for the Breeders' Cup. Here is some thoughts about the first stake of the Santa Anita Fall meet.

The opening day feature is the Grade 3 Senator Ken Maddy Stakes for fillies and mares three year old and up going about six and a half furlongs down the hillside turf course. The defending champion is back in Unzip Me. This Cal-bred daughter of City Zip returns to defend her crown off a fine win at Del Mar. She is five for seven (with a second) down the hill in her career. She hopes to use this race as a springboard to the Breeders' Cup Turf Sprint like last year, where she finished third. Her regular jockey Rafael Bejarano will be in the irons. While breaking from the inside posts is normally not ideal, the small field makes it less likely to have its normal negative effect. 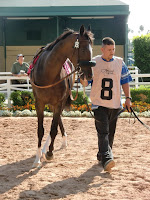 The likely second choice figures to be blog favorite Tanda (right). This daughter of Sweetsouthernsaint finally broke her five-race losing streak in the Grade 3 Rancho Bernardo Handicap last time out, getting her first win of 2011. She moved into the Mike Mitchell barn prior to the win, and her new regular rider is Joe Talamo. It pained this blog to miss the win, but glad she made it to winner's circle.She will break to the outside of Unzip Me, hoping to get a nice stalking trip off of her. She has worked well since the win, finishing off her preparations with a bullet 5 furlong drill across town. She has a 4-2-1-0 record lifetime over this unique course. Her goal this year is the Breeders' Cup Filly & Mare Sprint on the main track at seven furlongs. Under the allowance conditions of this race, she gives three lbs. to Unzip Me.

The other entrants are Separate Forest, who beat the top two back in April in the Grade 3 Las Cienagas; Broken Forest & Givine, who have traded decisions with each other and Separate Forest (All 3 finished behind Unzip Me in the Daisycutter last time out); and Waveline.

This race is the first of many Breeders' Cup preps at Santa Anita the next two weekends. This season is filled with hope from all the divisions. Who will go on to glory? Can Tanda avenge her loss from April? Will Unzip Me continue her winning ways all the way to Louisville? We shall see. Good luck everybody!
Posted by tencentcielo at 9:37 PM No comments:

This blog comes back from its unintended extended hiatus with a look at what one thousand dollars could have bought you at the 2010 Keeneland September Yearling Sale. The below spreadsheet is a list of every yearling that was purchased for $1,000 at the sale. These horses were sold as early as Book 3 all the way until the end of the sale. The sires range from the lesser-known and young sires all the way up to sires with above-average stud fees. Sixty-five horses make up the list, thirty-five colts and thirty fillies. Below is the spreadsheet listing all 65 horses. Out of the seventeen horses from the group who have made at least one start, ten have won. That is a high percentage (59%) given the stock and the cost. Even if none of the other horses in the group were to race, they would still have a collective 15% winner percentage, which is amazing considering the price. The highest earner so far Danger Storm, who is also entered in today's Grade 3 Arlington-Washington Futurity. He has made 10 starts this year, with a 1-1-2 record. This spreadsheet will be updated to keep track of this rag-tag group of horse, along with a quarterly look back at the horses to see how they progress going forward. This group looks to show that even with a small price tag, big things can happen.
Posted by tencentcielo at 12:54 PM No comments: