A Few Random BC Post-Draw Thoughts

A few random BC post-draw thoughts:

With the Breeders' Cup only days away, handicappers across the globe have started the task of dissecting the past performances of the pre-entered horses. From probable short-priced favorite Secret Circle in the Juvenile Sprint on early Friday afternoon to Uncle Mo in the Classic, the list of horses to cut through is large. The Classic is the marquee event, with the juvenile champion Uncle Mo and the filly Havre de Grace being the headliners. Others will fancy the New Zealand (by way of Australia and Europe) invader So You Think and the domestic feel-good story Flat Out. But for those who like Uncle Mo, here is another piece of information that may cause some concern. The following sheet shows the odds and the finishing place of the lowest odds three year old in the Classic for every year since the Breeders' Cup inception. (except 1985) [Now updated with 1985's result. Thanks Steve]
Only A.P. Indy has won among any of these fine three year old colts, among them five year end champions. Of the eight favorites, five have hit the board, which represents over half of the eight total on the board finishes. For those who think Uncle Mo is a standout and will win the Classic, maybe this piece of history will cool your enthusiasm just a little.
Posted by tencentcielo at 5:15 PM 1 comment:

If I Owned That Horse... (Breeders' Cup Edition)

With the Breeders' Cup a little more than 4 weeks away, some of the top name horses have some options on which race they could point to championship weekend. Some of their connections will choose the more conservative route, pointing to the easier race, while other connections will go for broke and choose the race with the bigger reward. Neither strategy is wrong, though some of the decisions are more frustrating to the average fan than others. Some fans would prefer to see certain match-ups to occur, while others would prefer a chance to play against a horse they believe has little chance at short odds. Here is are a few select horses who have some options, along with where this blog thinks they should go.

Uncle Mo
Most likely BC race: Classic
Blog's choice: Dirt Mile
The defending champion 2 year old won the Grade 2 Kelso in his last start in a fast time. But that was only his second start coming back from his illness that knocked him most of the Spring and Summer. He has only two one-turn races to build from to go ten furlongs (a distance he has never been). His trainer Todd Pletcher has a poor record in the Classic (and among his Breeders' Cup runners in general), going winless in the race from nine entrants. His owner Mike Repole is going to roll the dice and run him in the Classic. This blog think Mo should go in the Dirt Mile instead for the simple fact that he just has not had the right set-up heading into the Classic. To win a Breeders' Cup race, everything needs to go right, including the preps. Mo's races set him better up for the Dirt Mile, where he would be a heavy favorite and could win in devastating fashion. 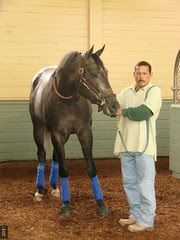 Most Likely BC Race: Sprint
Blog's Choice: Dirt Mile
The "Speed Freak" runs in Saturday's Ancient Title Stakes at Santa Anita. He is listed as the 3/5 morning line favorite and figures to be tough in there. He is a fast horse without a rating gear. If he wins on Saturday, he will have a strong resume for winning the Eclipse for Champion Three Year-Old Male topped off with a Breeders' Cup win. With his style, he would appear to have an easier time establishing his forward position in the Dirt Mile than the Sprint. Both races are Grade 1, so why not take the slightly easier race and lock up the division title? (With maybe a showdown with Uncle Mo?)

Twirling Candy
Most likely BC race: Dirt Mile (Classic being considered)
Blog's Choice: Mile
The John Sadler trainee had to miss the Goodwood Stakes last week due to a minor hiccup in his training. The connections say they will work him right up to the Breeders' Cup. He has three tries to win at the Classic distance of 10 furlongs, and while being right there, he seems to just not have the same "wow" factor he showed at shorter distances. With the BC being the location of his final start of his career, the connections are looking to add to his stallion resume with another Grade 1 win. That is why this blog should go in the Mile. While it would be a tougher race, the probable race flow for the race figures to be ideal, as he would get a dream trip behind his former stablemate Sidney's Candy. Twirling is already a graded stakes winner on the grass, and what better press could one get then the to stop the immortal Golidkova's attempt at a 4-peat?


Acclamation
Most likely BC race: Turf (but would go to the Classic if the turf is less than firm)
Blog's Choice: Turf
The connections of this Horse of the Year candidate has a tough decision to make with this cal-bred son of Unusual Heat. If they decide to go ahead and run in the Classic, they could throw away any chance at any year-end award. If they stay in the Turf, their fate is not in their own hands, as they will need help. This blog thinks that even if the turf comes up less-than-firm, the connections should stay in the Turf. Being a Southern California native, this blog has seen plenty of Unusual Heat's progeny run on the grass, but very few on a non-firm surface. The feeling from this blog is that UH's do not care for a grass course that has some "give" in it. However, the Churchill Downs turf course does seem to favor horses who lay closer to the pace when it is in this condition. With Acclamation's running style, he could be at an advantage.


Gio Ponti
Being pointed to: Mile
Where they should be pointed to: Classic
This son of Tale of the Cat has been second in both of his tries in the Breeders' Cup, finishing behind Zenyatta in the 2009 Classic and behind Goldikova in the 2010 Mile. He has not won in a year and appears he might just be on the downside of his career. His best may not even hit the board this year in the Mile, and it would be a sad way to end his career. Turf horses in America struggle to make it as sires unless they show some sort of dirt form (see: Giant's Causeway). That is why the connections should go for broke and run in the Classic. If he hits the board, it would be a major boost to his stud value. If he falters, it does not change the perception of him as being a turf horse.The risk surely worth the reward, no?

Speaking of Turf, this post is the the first since this blog proudly joins TURF, a collective of racing writers out to keep people informed about all aspects of the sport we all love. The driving force behind the group is the immensely talented Valerie Grash, the person behind the blogs Foolish Pleasure and Fillies First. She has put together quite an esteemed and varied group of racing scribes. Make sure to check it out at http://www.turfbloggers.blogspot.com/.

There are some thoughts about where this blog thinks certain horses SHOULD run when it comes time to the first weekend in November. As always, the fan always knows what is best for the athlete, right?
Posted by tencentcielo at 11:21 AM No comments: