Not many post-BC Thoughts for this blog, especially with a ton of disinterest in discussing year-end awards until at the earliest the first of the December. This blog did go 22-9-3-2 over the two days at Churchill Downs. (Taking early bird sign-ups for a possible BC 2012 syndicate now in the comments section!) But the lack of starting funds prevented a better outcome when it came to the wagering. So instead of some long diatribe about the weekend, this blog offers a picture of rainbow that appeared after a shower hit Santa Anita on Friday around first post. 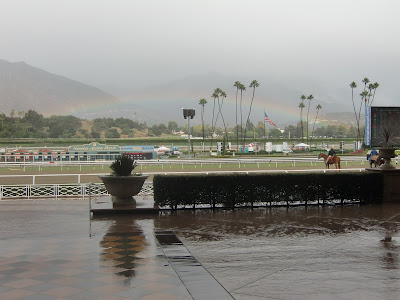 This blog will take some time off until the Hollywood Turf Festival over the Thanksgiving Day weekend (unless something major comes up that this blog begs to require comment)
Posted by tencentcielo at 10:45 AM