A Hollywood Prevue to a Star?

The stakes action starts off this Thanksgiving weekend at the track of the lakes and flowers with the Grade 3 Hollywood Prevue on Turkey Day. Going seven furlongs over the synthetic main track, this race is a prep for next month's Grade 1 Hollywood Futurity. This race in its past boasted winners such as Afternoon Deelites, Lion Heart and champion 2yo Declan's Moon, along with blog favorite Premier Pegasus. A possible star could break out with a strong performance. The field is a nice mix of stakes-tried horses and new shooters with buzz surrounding them. Let go over the field of eight, based on how they figure to run their respective races. 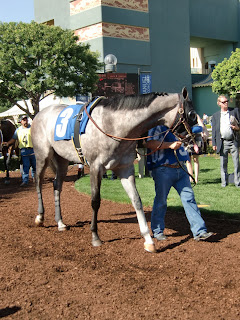 The probable front flight will consist of Sweet Swap, Hodge and So Brilliant (right). Sweet Swap dueled on the lead but faded late last time out in the Jack Goodman Stakes. The winner, Secret Circle, won the inaugural Breeders' Cup Juvenile Sprint next out. This full brother of Sidney's Candy will look to clear off from the rail. Hodge broke his maiden last time in a gate-to-wire effort while under pressure the entire time. He comes back in only 19 days off that huge effort, but he does have a good work in the interim. So Brilliant dueled early and cleared off to win as a heavily bet favorite in his debut lat month at Santa Anita. He has had four strong works, though why he had one work at Hollywood, then shipped back to SA to work is a bit odd.

The horses sitting in the second flight, about 2-4 lengths back, figure to be Sheer Talent and Mucho Besos. Sheer Talent looks to bounce back after a subpar effort up at Golden Gate. His trainer Dan Hendricks brings him back off on short rest for the race and looks to be the one to "inherit" the lead if/when the speed backs up. Mucho Besos will try to jump off from an maiden claiming win to a graded stakes win. This looks like it might be too much of a step up, though he could get a slice if he gets the trip and one of the closers doesn't fire.

Galex, Empire Way and Brother Francis  are the last three in the field. Galex ran 2nd in the Jack Goodman Stakes (beating Sweet Swap in the process) by laying back and making one run. While he did pass the other 4 horses in the field, he lost ground on the winner in the last 8th. He did win his debut gate-to-wire, but he figures to sit off the pace in here. He does have several good stamina building works here. Empire Way won his maiden stylishly 11 days ago rolling by the field from the back. This full brother to multiple grade 1 winner Royal Delta appears to be in this race as more of a building block for the Hollywood Futurity according to his trainer's comments. His trainer also has a less-than-stellar record coming back on short rest (less than 14 days) with a two year old. Brother Francis started slow in his debut but closed quickly to just miss behind Hodge. He should improve with the extra distance, and does have two good works since, but he has never been over a synthetic surface either. He could show more positional speed with a clean break. "Brother" does have history working against him, as in the last twenty years no horse has broken his maiden in this race.

This is a tough race because I can see any number of these winning, but the tepid pick is Sheer Talent to pull an upset. It looks like there is enough speed for the front-runners to be softened up and allow him to "inherit" the lead in the stretch and hold off the closers.

Good luck and happy Thanksgiving everybody!
Posted by tencentcielo at 9:20 AM