New Year's Eve is a time for celebration, remembrance and ending the new year with a bang.  The national graded stakes schedule has a similar ending. The last graded stake of the 2011 calendar is the Grade 1 La Brea Stakes going 7 furlongs for three year old fillies at the Great Race Place. This the last chance for these females to run against their own age group for Grade 1 glory. The field of nine has a mix of up-and-comers, graded stakes winners and a multiple Grade 1 winner as its favorite. Here is a brief run-down of the main competitors.

(Before we get into our thoughts about the La Brea Stakes, this blog is happy to announce the return of "Ten Top's T-Bred" Capital Account. Off since March, he runs in an allowance race that is the second half of the late double with the La Brea Stakes. We wish him luck and hopefully he stays healthy enough to have a productive 2012. Also note that fellow TTT Endorsement makes his second start off his near two year layoff on New Year's Day at Gulfstream Park.) 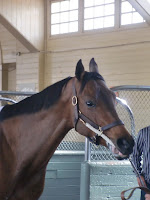 The probable favorite figures to be Turbulent Descent. This daughter of Congrats hopes to cap off a fine year with one more Grade 1 win, her 3rd of the year to go along with a Grade 2 victory. She looks to bounce back from a disappointing effort as the favorite in the Breeders' Cup Filly & Mare Sprint last time out at Churchill Downs. She has worked swiftly across town since her race, including two bullets. She seemed ready to run when she schooled in the paddock on Thursday (when the picture on the right was taken). Her regular pilot David Flores will be aboard. She figures to be 2-3 lengths off the expected fast pace, stalking and pouncing on the leaders in the stretch. Any further back could be detrimental to her chances based on how the track has been playing.


Great Hot exits the same race TD does, but finished well up the track behind her. She has a graded stakes win at this distance and her North American debut over this track was a jaw-dropping effort. Her trainer has stated that he should could be a little short for this race, but her swift workouts say he could be just being conservative with his thoughts. Home Sweet Aspen is the second choice on the morning line but will probably float up in the odds. She has run well over this track, but breaking from the rail her jockey's hand could be forced to go the lead. She is another with good works over the track, and looks to put that turf experiment behind her. 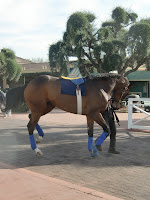 May Day Rose (right) comes off a brutal loss in the Grade 3 Chilukki on the BC Saturday undercard. She has also won a Grade 3 at this distance as well as a stakes over this track. Her positional speed will allow her to attend the pace without going all out to establish herself early. She will get first jump on the favorite if the race plays out how this blog figures it will. Even though she is the 8/1 5th choice on the morning line, this blog believes her final odds will be closer to 7/2. She was on her toes when she schooled on Thursday (at the same time as Turbulent Descent) as the picture shows. She really caught the eye the entire time in the paddock, and because of that, she will be the selection for this blog.


So there is a quick look at the last Grade 1 of the year. Can Turbulent Descent rebound after flopping as the favorite? Will May Day Rose or Great Hot add to their earlier 2011 graded stakes tallies with a Grade 1? Will a new face jump up and shock the world at a price? Good luck everybody!

Posted by tencentcielo at 6:56 PM