Last weekend, the search for the "Drought Breaker" began in earnest, with two stakes races at The Great Race Place. On Saturday, a field of five ran in the Grade 3 Sham Stakes, while on Monday, 7 sophomores hooked up in the San Pedro Stakes. In between, there was a sterling maiden breaking performance put in on Sunday by a horse who had some buzz. Also, several possible contenders continued to work towards their next start, and one made his first appearance in the afternoon (albeit while schooling). 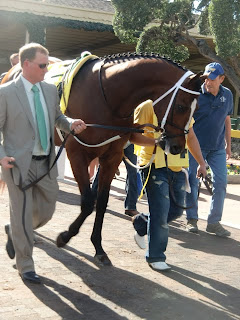 Saturday was the beginning of the Derby trail out at Santa Anita, with the running of the $100,000 Grade 3 Sham Stakes. 5 horses lined up, with the heavy favorite being Tapizar (right). This son of Tapit went to front end and never looked back, winning in gate-to-wire fashion. He repulsed a brief challenge from multiple graded stakes-placed Clubhouse Ride turning for home, and won in a solid 1:40:38, which was faster than either of the two Grade 2 stakes held for older horses that weekend by over a second. He should have no problem with the additional distance as time goes along. His trainer Steve Asmussen said that he will remain in Santa Anita for his next start, in either the Grade 2 $250k Robert B Lewis S. on Feburary 12th going 1m & 1/8, or the Grade 2 $250k San Felipe S. on March 12th going 1m & 1/16th, the same distance as the Sham. 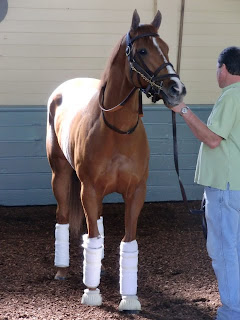 On Sunday, while no stakes races happened, there was a maiden special weight race that had some buzz preceding it around the track. The 4th marked the debut of two horses with some hype, the Steve Asmussen trained Albergatti, and the Bob Baffert trained Da Ruler (right). Da Ruler had a large quantity of buzz surrounding him, and he was bet accordingly, down to 1.20-1 favorite. This son of multiple graded stakes & debut winner Roman Ruler out of stakes and debut winner Dirty Diana did not disappoint, as he went right to the lead from his rail draw, repulsed an attack by Albergatti at the 1/16th pole, then kept his opponent at bay for the final strides. He won in a strong time of 1:14:52, or almost .8 faster than the San Pedro Stakes did the nest day. Who knows what the future holds for Da Ruler, but him and the runner-up seem like they could have a bright one ahead. 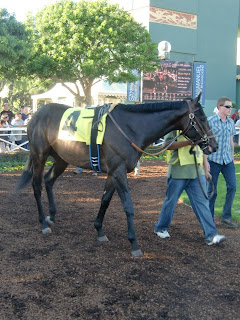 Monday brought us the $103,100 San Pedro S. at 6 1/2 furlongs. The betting public had a hard time sorting out the field, eventually settling on Arcadian, making him the lukewarm 3-1 favorite. Both Sinai and City Cool also were bet, being the co-2nd choices at 3.40-1. City Cool went right to lead, with Arcadian sitting just off early on. Arcadian could not live up to his favorite's role however, and faded back to 6th. City Cool held the lead until the final few strides, when Indian Winter (right) came from off the pace to pull the upset as the longest shot on the board at 10-1. This son of Indian Charlie was coming off a 4 1/2 month layoff, finishing a distant third in the G1 Del Mar Futurity. He should be fine with some additional distance, especially being out of a Dixieland Band mare, and his style should be a benefit as the races get longer. 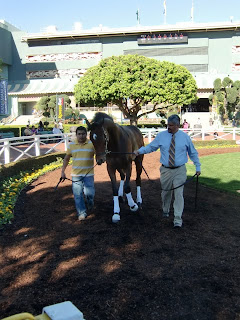 So the stakes action has begun at Santa Anita, and the horses have begun to sort themselves out into contenders and pretenders. Tapizar struck first blood, Indian Winter reaffirmed the strength of the Del Mar Futurity, and Da Ruler proved that the hype was at least partially warranted. Can any of these continue on and be "The Drought Breaker"? We soon shall see.
Posted by tencentcielo at 11:36 PM