The first 2+ weeks of the Santa Anita meet have past, and we have witnessed several strong performances from the newly minted three year olds. This post is the first of what will be a weekly series tracking the horses that look to break "The Drought". "The Drought" is what this blog is calling the 22-year gap since the last winner of the Santa Anita Derby went on to win the Kentucky Derby. This series will take a look at any three year-old races (whether maiden, allowance or stakes) that occur during the meet that show any promise of having a potential "Drought Breaker". It will also list some of the works of these horses. Since this is the initial post, it will be longer than normal, as there are 8 races to recap, plus two to preview. The races will be reviewed in chronological order, starting with opening day. 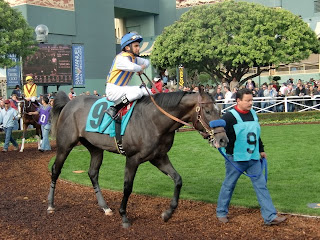 This review start off with the 3yo probably most well known, The Factor (pictured). He won the first maiden special weight of the meet in sizzling fashion, setting a track record for 6 furlongs in his 2nd lifetime start. He went to he front and just kept going in a gate-to-wire win. He has come back to work a swift 5 furlongs on 1/9 for trainer Bob Baffert, and is nominated for Monday's San Pedro Stakes. This blog wonders if he can get the 1m & 1/8, much less 1m &1/4. The runner-up Houston Harbor has also come back to work, with two steady spins at 4f & 5f. This Steve Asmussen trainee will look to break his maiden next time out, maybe at a route of ground.

The race after, Cal-breds squared off in the California Breeders Champions Stakes. Thirtyfirststreet rallied from well off the pace to win. Will his sire was a multiple GSW on the turf, he seemed to handle the turf just fine. His pedigree suggests that he should have no problem as the distances increase, as both sides of his pedigree say "route". While the time was not super-fast, it was a solid race. 31st St. has come back to work three furlongs, and may be pointed to the Robert B. Lewis going 1m & 1/16th on February 12th.

The following day had the card lead off with a maiden special weight going a mile, in a race that was scheduled for the turf but run on the main track. Uncle Sam sat just off the speed, made his move turning for home and won in workmanlike manner. He won it in an alright time, but not sure what he beat in that race. This Baffert trainee came back to work on Sunday an easy 5 furlongs, and looks to build off his debut win in his next start, which is the Grade 3 Sham Stakes this Saturday.

Wednesday brought an allowance race that scratched down to a compact field of three. Awesome Patriot ran to the lead, with G3-placed Riveting Reason sitting right off his flank. RR engaged AP and dueled with him for a good while, but AP prevailed in the end. There is not much you can glean from this race, other than maybe Riveting Reason is better on the lead. Awesome Patriot by (who else) Bob Baffert, and came back to work on the 9th (as most of Baffert's charges did), and may end up being the odd man out in the barn. This blog thinks AP is destined for OP for his next race.

New Year's Eve brought us the Eddie Logan Stakes going mile on the grass. The winner was Silver Medallion. This son of Badge of Silver rallied from just off the pace. While the win was on turf, he should be just fine on the dirt. He "worked" for Asmussen on the 9th (a very busy day), but it was the slowest of the day. since it was only 9 days after the race, the time was irrelevant, as it was clearly just a leg stretcher.

We now skip ahead to this last weekend, where two maiden special weight bookend the early pick 3. In the 1st race, Hollywood Heat sat off a speedball and perfect-tripped his way to an easy win under a handride going 5 & 1/2 furlongs. It was only a field of 5, and did take 6 starts for him to break his maiden, but it was in a good time. Two races later, a field of 8 runners went a mile. The gate-to-wire winner was Wegner, trained by (guess who?) Bob Baffert. Wegner had to work for the victory, while under some urging. Like all of Baffert's winners listed here, he was ridden by Rafael Bejarano. Unlike the others, Wegner was a fat 8-1 on the board in winning his fourth lifetime start. Being by Dynaformer out of a Seeking the Gold mare, he should have zero issues with the distance.

Sunday brought a 5 horse field going 7 furlongs. First time starter Kilograeme hugged the rail and wore down the heavy favorite right before the wire. This son of Graeme Hall made his debut a winning one. He should have no problems with the distance, but for him to be the "Drought Breaker", he would have to be the first horse since 1881 to win the derby while not running at two. 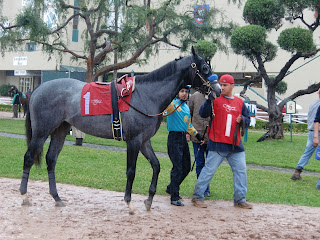 Now that the (extended) recap is over, on to the preview of this weekend's first derby preps of the meet, The Grade 3 Sham Stakes and the San Pedro Stakes. The Sham will be run at a mile and 1/16th. It drew a field of five. Uncle Sam (who we mentioned earlier) is Baffert's lone entrant, and breaks from post 2. Tapizar figures to be the favorite off of his huge maiden win last out at Churchill Downs going a mile & 1/16th. This Asmussen trainee won by 10 1/2 lengths, and acquires the services of top rider Garrett Gomez. On Monday, the San Pedro Stakes will be run. Baffert nominated 5 of the 14 nominees, including Awesome Patriot and The Factor, along with Sinai (pictured), who was a swift debut winner at Hollywood Park last month from the rail at this distance. The interesting horse (if he runs) is Arcadian. This son of Songandaprayer blitzed the field in the Lost in the Fog Stakes at Turf Paradise, and threw a bullet 6f work in the interim.

The search is on for the horse. The one horse who will find his way to the winner circle come April 9th. That horse will carry the hopes of ended the drought. Who will be... The Drought Breaker?
Posted by tencentcielo at 8:18 PM