A California Spin on the Iowa Festival of Racing

The Iowa Festival of Racing always brings together an solid bunch of horses to Prairie Meadows. This year's group includes several graded stakes winners and some up-and-comers looking to make a mark. The runners ship in from throughout the Midwest, with a nice SoCal contingent to spice things up. Let start out with the Friday night action, where three stakes take center stage.

The stakes action starts with two stakes for the ladies. First off is the Saylorville Stakes for female sprinters. The Cal-bred Tornado Betty began her career in Northern California before heading to the Midwest to ply her trade. She has come back to California for the occasional stakes foray. She was beat in the local prep for this race by two of her fellow competitors. After that is Iowa Distaff Stakes for the routers. Freedom Star comes in off a long layoff of 15 months, having last raced on the 2010 Sunland Derby undercard in a victory in the Harry Hensen Handicap. She has trained in typical Baffert bullets for this race and Rafael Bejarano will have the mount. Note that while most of preparations were on cushion, her last work was on the dirt at Santa Anita. 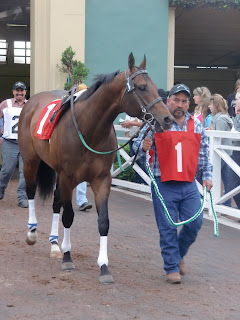 The last stake of the night is the Iowa Sprint Handicap. The favorite is the Baffert trained Ventana, who stayed at Churchill Downs after winning a Grade 3 on the Preakness undercard. He has worked steadily, though not the same typical flashiness of Baffert's other charges. Bejarano will have the mount for the race, and he looks tough. It is a little interesting the connections chose to run him here and not the Grade 1 Triple Bend at Hollywood Park in two weeks, especially with solid efforts on synthetic tracks. Winter Camp was a hard knocking optional claimer type out here until he was claimed by his current connections when he went to Sunland. He bats 50% at this distance, with 3 wins from 6 starts. His need-the-lead style figures to be severely compromised by the presence of Atta Boy Roy (right).

Saturday brings the second day of the festival with more SoCal connections with it. Prayer for Relief ships in for the Bob Baffert barn. He brings with him jockey Rafael Bejarano for his initial start on dirt. In his first start of 2010, he won a first level allowance race at Hollywood Park last month off a 6 month layoff. This will be his first attempt in a graded stakes. While his stalking style will work well in this race, there is a serious class question with him, as he would be thought of as one of Baffert's first or second tier 3yo charges. There is another SoCal connection, though it is not as obvious. Chosen Miracle is out of the mare Royally Chosen. SoCal fans will remember her rivalry in the 2002 La Canada series with multiple Grade 1 winner Affluent and for her multiple Cal-bred stakes wins. That rivalry is one of the earlier memories of this blog's memory as a horse fan and it was a big part of how big of a fan it is to this day. Chosen Miracle has been on this blog's stable mail since he was first named. He has won his only two starts in wire-to-wire fashion, one on a sloppy track at Hawthorne and another on the Poly at Arlington. While this is a big step up in class, he looks like he has a bright future. This blog will choose him to upset the favorite Astrology and the Baffert charge.

The final stakes of the festival is the Grade 3 Cornhusker Handicap. The old road warrior Awesome Gem comes into the race off a victory in the Lone Star Park Handicap last time out. He was much closer to the pace than normal, and that helped him to get the victory. The eight-year old worked his normal solid self since the win, and he'll keep plugging along. He is the morning line favorite in the race. The other SoCal shipper is Victory Pete. This son of Sky Mesa finished 4th in the 2009 rendition after a troubled trip. He has struggled at this distance in the past. This blog thought he had a big chance to win the Californian last out, but he faded badly to last in the final 1/16th. Blog favorite Stachys is the pick in the race off his good effort last time out.

So there are some thoughts on the horses with a California connection running in the Iowa Festival of Racing. Can Awesome Gem win two in a row for the first time since 2006? Will Chosen Miracle be the next breakout star? Good luck this weekend everybody!
Posted by tencentcielo at 2:40 PM