Fostering Thoughts of a Flat Out Upset

The older horses take the stage this weekend in the Grade 1 Stephen Foster Handicap at Churchill Downs going a mile and one-eighth. With no real leader in the older male handicap division, this is a chance for someone to seize command with a win. Eleven horses will step into the gate with the chance to get a Grade 1 win. These runners are evenly matched, with no dominate favorite among them. That is shown by the fact that the morning line favorite is at 7-2. The thoughts on this race will begin with the tepid morning line favorite Giant Oak.

#10 Giant Oak has been in the winner's circle once at Churchill Downs, but it was via the DQ in the Clark Handicap. Before that, he had a run of fourth-place finishes there, including a fourth in this race lat year. In his last start, he finished 5th in the Alysheba here 6 weeks ago, behind fellow entrants Equestrio and Regal Ransom, but ahead of Mission Impazible. He figures to make his late run from well off the pace, which could be a problem, since there is not a ton of pace. His outside post position is not an issue, and he has been training fantastically in the interim.

#6 Regal Ransom and #11 Mission Impazible figure to be the pacesetters in this race. Regal Ransom was nailed at the wire in the Alysheba by probable Hollywood Gold Cup favorite First Dude. As his passing gear is non-existent, his jockey Alan Garcia will attempt to get him to the front, then slow it down. On his flank figures to be Mission Impazible who does his best work when sitting just off the leader. He beat Giant Oak and Apart two back in the New Orleans Handicap. Other than his outside post, he figures to have a good chance. The dull effort last time out is some cause for concern though. 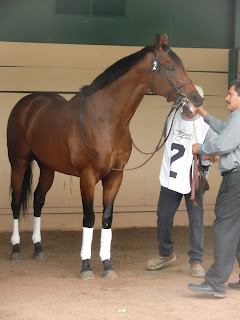 #2 Crown of Thorns (right) invades from the West Coast for trainer Richard Mandella with jockey Tyler Baze in tow. He won the Mervyn Leroy Handicap at Hollywood Park last out, wearing down Sidney's Candy in the final 1/16th of a mile. Mandella said that the six weeks between races was perfect timing for his charge, and he has been working steadily after his win. While he has only run on dirt once, it was off a layoff and probably a distance short then his best (at least on dirt). The way he trains over dirt and his pedigree suggests that he will be fine over it. He should have no problem with the mile and an eighth today, and figures to be sitting right behind Regal Ransom and Mission Impazible early on.

#3 Apart looks to follow the path of his stablemate last year and win the Foster after a win in the Schaefer on the Preakness undercard. Blame pulled the double for his connections, then went on to win the Breeders' Cup Classic last November. Apart won in workmanlike fashion in the Schaefer in a close finish. He was beaten multiple times over the winter by Mission Impazible and has split decisions with Giant Oak. He seems to have bounced back fine, with a couple of solid works at his Keeneland home base. This son of Flatter has all the tools to win, but the fact that he another change in rider is a bit disconcerting. His last rider, top jockey Garrett Gomez, decided to ride Blind Luck in the Vanity Handicap. While Julien Leparoux is no slouch, the fact that Gomez left

Yet none of those is the pick for the race. The pick is the co-longest shot at 30/1 on the morning line #1 Flat Out. This son of Flatter has been a blog favorite even before the existence of this blog. This blog thought that he had retired after getting hurt after the 2009 Arkansas Derby, but was pleasantly surprised when he returned to the races in December 2010. That winning effort was stymied by another layoff until Memorial Day this year, in which he ran second to the consistent old-timer Awesome Gem in the Lone Star Park Handicap, beating multiple graded stakes winners Game On Dude and Thiskyhasnolimit in the process. He popped a swift work in the interim, has a hot jockey in Corey Lanerie and figures to make his move from mid-pack. He is in light at 114 lbs., 4-9 lbs. less than any of the major contenders. While he is taking a major class hike today, and the pace set-up is not that great, at the price he figures to be, this blog is willing to take a shot.

Someone looks to take some measure of control in the handicap division with a victory in this race. A son of Flatter looks to make a mark, but not the one most think. Can Flat Out flat out cause an major upset and announce his arrival? We shall see. Good luck everybody!
Posted by tencentcielo at 1:54 PM