Fourth of July weekend bring two grade 1 races to the track of the Lakes and Flowers. The Shoemaker Mile on the turf and the Triple Ben Handicap sprinting seven furlongs on the main track. These two stakes have a long and rich history, with both of them running their 60th+ iteration. These two stakes both each have solid fields that bring together an eclectic group of runners, from former Grade 1 winners to up-and-comers looking to make a mark. Let's start with the first one on the card, the Shoemaker Mile.

The Shoemaker Mile marks the first race since his trip to Dubai for the defending champ Victor's Cry. He won this race last year in a stunning upset at 21-1. (video of that win below) Half of his six lifetime wins, and his only two stakes wins, have come over the Hollywood Park turf course. He's won off a similar layoffs in the past. He has come back solidly on the work tab in preparation for this race. His jockey for last three start Victor Espinoza is in the irons, and it looks like he has a good chance to defend his title.


The main threat to his title defense figures to be Courageous Cat. This son of Storm Cat out of the multiple grade one winner Tranquility Lake (who won multiple stakes over the Hollywood Park turf course in her career) started his year off in a winning fashion in the Poker at Belmont Park on Belmont Stakes eve. He popped a solid dirt work in the interim. CC must be going well for his connections to ship across country on three weeks rest to annex this Grade 1, which did come up softer than expected due the injury of Ryehill Dreamer and the sale & transfer of Sidney's Candy. While he has never been over the course, he should have no problem adapting to it, especially with his mother's success over it. Others who could have an impact are likely pace-setter Liberian Freighter and perennially overbet Carcortado. 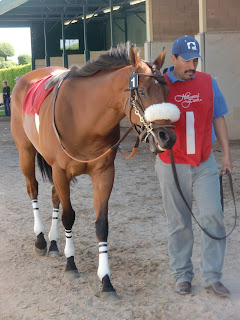 Three races later, eight hook up for the Triple Bend. The favorite and highweight is Amazombie (right), who was questionably disqualified from a win in the Grade 3 LA Handicap. He hopes to continue his strong efforts in the race with his solid workout since the last race. This would be a stamp on the strong series of races he has run since October of last year. Those looking to beat him are: Grade 1 winner M One Rifle, who was interfered in the LA but was never going to better than the third he originally finished (the DQ put him up to second); Grade 1 winner Smiling Tiger, who looks to bounce back after a so-so effort in the CD Handicap last out; and Color of Courage, who has run two monster races after a 19 month layoff and steps up for his first graded stakes try.

So there's a quick rundown of the two Grade 1's on this Fourth of July weekend at Hollywood Park. Can Victor's Cry defend his title? Will Courageous Cat do his mama proud? Can Amazombie get a Grade 1 win? Good luck everybody!
Posted by tencentcielo at 2:19 PM