A Tiger Defending His Crown

As the second week of "where the turf meets the surf" rolls on, the Grade 1 Bing Crosby Stakes is the big race of the weekend. This Sunday at Del Mar brings together of a field of seven sprinters, including the defending champ Smiling Tiger. He looks to hold off several challengers to his throne, including the horse who defeated him back in January, Euroears. This race could end up having major end-of-the-year award ramifications. With the lack of star power in the handicap and three year old male divisions, Smiling Tiger could be the first horse who is exclusively a sprinter in a long time (maybe ever) to have a chance at Older Male and Horse of The Year honors if he runs the table. Let's break down this group, starting with the favorite and defending champ. 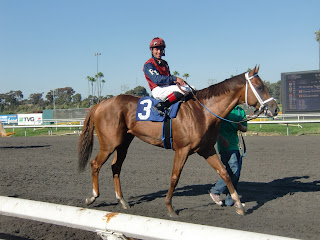 Smiling Tiger (right) Comes off a huge win in the Grade 1 Triple Bend Handicap at Hollywood Park last month. He bounced back from a trouble-filled 6th in the Churchill Downs Handicap, which is his only off the board finish in his career. He returns to the site of his first graded stakes win of his career last year, which occurred in this race. His win last year was the earliest win by a three year old versus older horses in graded stakes competition. He was the only three year old to beat older horses multiple times in graded stakes competition. He has the rail draw, which he is winless from in his career. This race is being run under stakes conditions, which means that he is giving at most four lbs. to his competitors. The lack of weight difference plus his consistency and gameness all lead to him defending his title.

The horse who defeated him earlier this year at Santa Anita is Euroears. This son of Langfuhr has not raced since finishing 2nd in the Dubai Golden Shaheen in March, finishing a solid second to top international sprinter Rocket Man. Euroears has worked in typical swift Baffert fashion coming off the layoff, with several bullets in tow. His jockey for the last few mounts Mike Smith chooses to stay with Amazombie, so top local jock Rafael Bejarano will take over the mount. His pedigree is not great for the Del Mar Poly, with his sire's runners having only win out of nineteen tries. With his need-the-lead style he may have some trouble getting separation from the other speed, especially Smiling Tiger.

Amazombie finished 3rd in Triple Bend behind Smiling Tiger with no apparent excuse. He's had some nice easy works since that race, with his last two coming over the track. It is possible that he could just being wearing down a little, with this being his 7th start this year and him running every four weeks like clockwork since last October. Mike Smith chooses him over Euroears. His pedigree is solid for his initial try over the Del Mar Poly, with both sire and damsire having good numbers.

The others in the field are Grade 1 winner Kinsale King, who was last seen being a late scratch in Dubai; Grade 2 winner Coffee Boy, who makes his first stakes start for his new trainer Mike Mitchell; and allowance runners Carbonite who makes his first career stakes start and Color of Courage, who followed two strong allowance wins with a poor 5th in the Triple Bend.

So there are some thoughts on the Bing Crosby. Can Smiling Tiger defend his crown, avenging his defeat to Euroears? Can Amazombie get that Grade 1 win, continuing his fairytale run for his connections? Will Kinsale King regain his past form and rise to glory? We shall see. Good luck everybody!
Posted by tencentcielo at 8:54 AM