Today's post is a bit of a departure from the normal fare, as it is not talking about one specific race or topic, but a look inward at explaining one of the things about this blog. On the left side of this blog, beneath the TBA widgets is a sidebar know as Ten's Top T-Breds. This is a list of this blog's favorite horses currently in training around the nation. Some of these horses this blog has never seen before in person, others he has watched since the beginning of their careers. There is no set rhyme or reason why any of these horses ended up on this list, but they all have a spot in this blog's heart. There was just a moment in which this blog and the horse just clicked at some point, usually (but not always) early on in their career. Now the TTT-Bred list shows only five horses currently right now, but there are actually nine on that list. The reason only five are shown at one time is that listing nine ended up looking too cluttered to be effective. The horses are rotated in depending on whether they are starting soon or not. Only two horses have permanent spots on the list, Tanda and Premier Pegasus. Here are the nine horses, along with a quick bio of each. 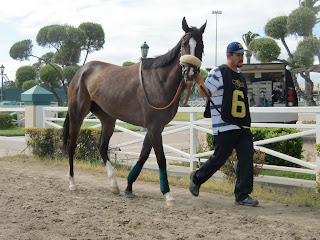 Tanda [right](Sweetsouthernsaint - Docs Stormy Girl) is a four year old filly in the Dan Hendricks barn here in Southern California. This blog first joined the bandwagon after a nice allowance win in March of 2010 after first seeing her in her maiden win in the opening weeks of the Santa Anita meet. She then went on to win two Grade 3 races in the Santa Paula and Railbird Stakes before her 2010 year ended with a troubled third in the Grade 1 Acorn. She has made three starts this year, most recently a third in the Redondo Beach Stakes. She is pointing to the Grade 2 A Gleam Handicap at Hollywood Park this weekend.

Flat Out (Flatter - Cresta Lil) is a five year old horse in the Charles "Scooter" Dickey barn in Kentucky. This blog "clicked" with him after his maiden win at the Fair Grounds in December 2009. He went on to win the Smarty Jones Stakes at Oaklawn Park before finishing off the board in two stakes along the Derby trail. He was off the track from the 2009 Arkansas Derby to December 2010, when he won an allowance race at the Fair Grounds. This was followed by another layoff until a 2nd in the Lone Star Park Handicap on Memorial Day. After a dull effort in the Stephen Foster, he bounced back with a superb win in the Suburban Handicap. He is pointing to either the Iselin Handicap or the Woodward Stakes. 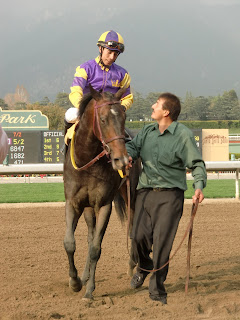 Premier Pegasus [right] (Fusaichi Pegasus - Street Hero) is a three year old colt in the M.K. Cho barn here in Southern California. He is 4-for-5 lifetime, with his only loss being a 3rd to the Factor in the San Vicente Stakes. His biggest win came in his most recent race, when he decimated the field in the San Felipe Stakes. Unfortunately, he was forced to the sidelines after that race due to an injury. He is due to return to training in a couple of weeks.

William's Kitten (Kitten's Joy - Blush) is a four year old colt in the Michael Maker barn. He (along with with the now retired multiple grade 1 winning & former inaugural TTT-bred Blame) caught the eye with his devastating win on the 2009 Super Derby undercard. After two so-so efforts over synthetics, he ran second to the eventual Kentucky Derby winner in the KJC. He started 2010 strong with a third in the Holy Bull, but was derailed with an injury that sideline him for a year. He has not shown the same spark this year, but this blog still cheers for him.

Wasted Tears (Najran - Wishes and Roses) is a six year old mare bred, owned and trained by Bart Evans. She caught the eye first in the 2010 Grade 3 Honey Fox, when this blog picked her to win even though she was a speed horse breaking from post 13 (She won). This blog has a soft spot for speed horses who have "come and catch me" speed AND tenacity in a stretch duel. She finished off the board in her last start attempting to stretch her speed 9.5 f in the Grade 3 Modesty Handicap. The connections are hoping to get her a grade 1 win, so if they do not head back to Del Mar to defend her title in the Mabee, maybe the Grade 1 Diana on 7/30 is the next target?

Might (Arch - Liable) is the full sister to 2010 BC Classic and Champion Older Male Blame. She is in the same barn and owned by the same people as Blame. She has been a TTT since the beginning of her career due to whom her brother is, but she has kept her place after some good efforts, including a nice win on the Kentucky Oaks undercard. She has not worked since an off-the-board finish in the Dogwood Stakes last month.

Chosen Miracle (Ghostzapper - Royally Chosen) is a three year old colt who is the newest addition to TTT. This blog talked about him before his off the board finish in the Iowa Derby last month. There are rumors he is coming to the West Coast and Del Mar for the Oceanside Stakes next week. 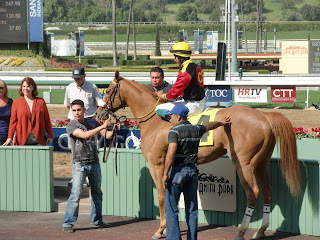 Beyond Loaded [right] (Lindsey's Roberto - Ready and Willing; 8yo) and Capt. Sparrow (General Meeting - J. T.'s Pirate; 7yo) are the last two horses on the TTT. Both are older Cal-bred lower-level claimers who have been around a long time on the Southern California circuits. Both broke their maiden in their respective debuts, paying boxcars, and have slid down the ranks over the years.. They are the kind of horse who are the lunch pail, hard hat, grinding type of claiming horses that make up the backbone of the game.

So there are the horses who make up the roster of Ten Top T-Breds. The love never stops for these fine animals nor any of the other runners. Good luck out there folks.
Posted by tencentcielo at 3:25 PM