The Grade 1 Hollywood Gold Cup has a long, rich history that one of a field of eight hopes to add upon. Such great horses as Seabiscuit, Citation, Affirmed and Cigar have won this race in the past. The eight entrants have diverse path to get here for their chance for the win. From a former maiden claimer to a multiple graded stakes winner who looks to put it all together at the classic distance to an ageless veteran looking to defend his crown, these eight entrants all have a different path to here. The supporting stakes is the Grade 2 Swaps for three year olds, where Coil looks to add another stakes win notch to his belt before moving on to bigger and better races back east. We will start with the Swaps. 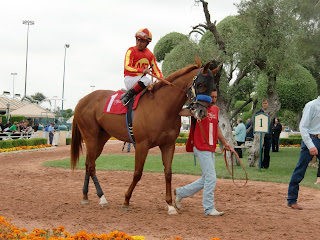 The Grade 2 Swaps Stakes (named for the California-bred winner of the 1955 Kentucky Derby and the 1956 Hollywood Gold Cup) will have a heavy favorite in Coil (right). This son of Point Given bulled his way to a win the Grade 3 Affirmed last time out over this track. He continued his strong work pattern in the interim and there seems to be no reason (at least on paper) that he will go down in defeat. His pedigree dictates the additional distance will be no problem to him, with a Belmont winner as his sire and multiple graded stakes winner at 12f as the damsire. The horse who is the most interesting prospect to upset is Boxeur Des Rues. This Doug O'Neill trainee won a first level allowance race last time out on the turf in solid time. The last time he ran over the synthetic, he bolted turning for home in his first two turn race. It looks like he has turned a corner, but this surface and the class are still major questions.

Now we turn the attention to the big one, the Hollywood Gold Cup. Twirling Candy figures to be the favorite in the race off his win in the Californian, where he rated off a dawdling pace and a tough trip to sweep to victory. (below)


Now he will stretch out another furlong once again in attempt to add to his Grade 1 win total. The expected tepid pace means that his best strategy (but one not likely employed) is to go straight to the lead from his rail draw, settle in front and then burst away in the stretch. If these tactics are not employed, Rosario could end up in an untenable position pinned down on the rail behind horses.

Many can take advantage if Twirling has a similar meltdown like the Big 'Cap. Second choice figures to be First Dude. He won the Alysheba last time out on the Kentucky Oaks undercard. He has reinvented himself as an off-the-pace type after several near misses last year. This will be the slowest pace he has to sit off since the tactics change and one has to wonder whether he has the punch to come home fast enough. He ran well over the Polytrack in the past, but until they run over the track, who knows how he will react to track. Game On Dude won the Santa Anita Handicap earlier in the year, but has had two bad losses since the win. He figures to end up on the lead (unless Twirling guns it) without any other pace in the race but who knows how he will react being in front so early. This is also his first race over the synthetic, so who knows if he will take to it, even if he has trained well over it.

There are others in the field who will take some attention. The mare Miss Match comes in off a third in the Vanity, but has never faced these types at this distance. Setsuko finished 2nd behind Twirling in the Californian and seems to do his best running as the distances increase, but is that because he is a grinder without a big kick? The old veteran and defending champ Awesome Gem ran 2nd in the Cornhusker just two weeks ago and was going so well that the connections decided to audible and run here as well. Soul Candy will try to close from the back of the pack, as will invader Dark Cove. Dark Cove has won twice over the Poly at Keeneland, but his musical chair jockeys continues with his 7th straight new pilot, this time obtaining the services of top jock Rafael Bejarano.

This blog is going with Coil and Dark Cove. Coil is the class of the field in the Swaps. Dark Cove appears to have the best kick among the closers, and with the expected slow pace, it could turn into a 1/2 mile sprint for home.

Good luck this weekend folks!
Posted by tencentcielo at 10:33 AM